From the younger Pre-Prep years through to Prep years we strive to inspire our pupils to explore the world of science around them. The sciences are an essential building block in developing creativity, technical skills and problem-solving skills. 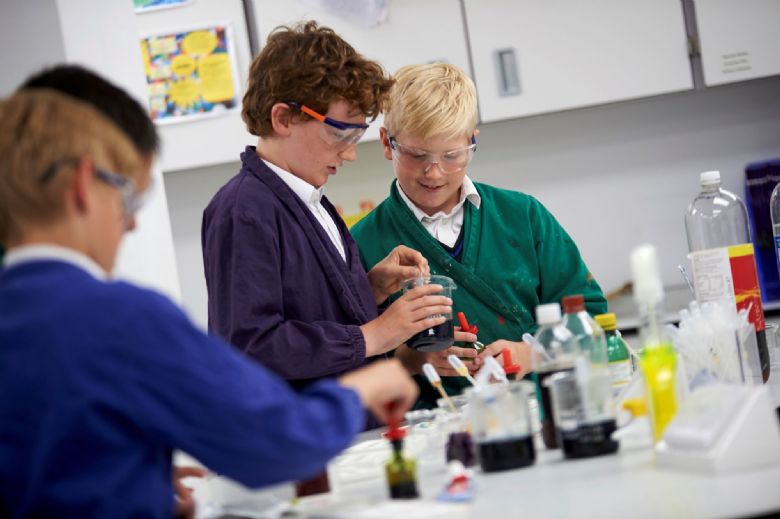 Pupils are introduced to the world of science through activities connected to the areas that they are studying. Simple activities such as playing with water allow pupils to think about the action of forces and gravity, link ideas about volume and pressure as well as thinking about the differences between solids, liquids and gases. Areas studied include nature and living things, electricity, solids, liquids and gases and space and the solar system.

We follow a curriculum that encompasses the Key Stage 2 specification. Pupils will develop further the skills they have learnt in the Pre-Prep and now increase their knowledge and scientific thinking skills, becoming more independent as they pass up the school as they carry out their practical investigations. In Years 3-4 Pupils follow a science curriculum taught by their class teacher under direction of the Head of Science. The curriculum allows for the pupils to learn through practical discovery and working out how best to solve those big science questions such as "How can we get drinkable water from seawater?"

Pupils will also begin to visit the school's specialist science laboratories and be introduced into using science equipment such as building circuits and performing simple evaporation experiments.

Pupils will follow a curriculum that combines both the Common Entrance and Key Stage 3 syllabi which allows every pupil the full experience of all three sciences,  physics, chemistry and biology and as much practical work as possible. From Year 5 all pupils are taught in science laboratories by one of our science specialists.

With experienced specialist teachers working in fully equipped science laboratories, the department is able to offer support to pupils who find some aspects of the subject a little more challenging, whilst stretching those who are aiming for scholarship places. We are ultimately aiming to inspire all to apply scientific creative thinking to their lives, encouraging them to enjoy science so they are able to utilise these skills in their future studies and careers.

The science department prides itself on the range of extra-curricular activities that it offers including STEM club, problem solving club, LEGO club, First LEGO League along with drop in support study sessions for all pupils.  We run many inspirational visits, outings and activities including: The Natural History Museum, where our Year 6 pupils learn about the work of the modern day research scientist, and The Science Museum where pupils from Year 5 can see how vital STEM is in our everyday lives. We have also hosted STEM days for local schools with activities counting towards the children's CREST Superstar awards.

In October 2019 Heath Mount took a group of Year 7 & 8 STEM Club pupils to NASA and Florida to study the role of STEM in Space travel, environmental impact protection and the role of physics in keeping people safe on rides. Pupils visited a wide variety of locations including the Kennedy Space Centre, NASA, Disney Magic Kingdom, Universal Studios, Dinosaur Park, Science Museum, the Everglades and Sea World over 10 days. The next trip blasts off in 2021!

Heath Mount were privileged to have been selected to help judge the Royal Society's Young People's Book Prize 2018. Year 5 and 6 pupils helped choose 2018's best science book for kids together with over 300 other schools, clubs and youth groups specially selected from across the UK to choose the winner of the 2018 prize.

The shortlist of six books was picked by a panel of adult judges led by 2018 Chair, Professor Yadvinder Malhi, FRS, an Ecosystem Ecologist from Oxford University. Through the themes covered in the shortlist, our pupils got to explore the dinosaurs that roamed lost prehistoric lands and measured themselves against the dinosaurs' life-size bones, teeth and claws; they headed off with NASA’s Mars rover Curiosity on a journey from the laboratory to the Red Planet, and discovered 50 fearless female scientists who changed the world. The Prize celebrates the books that communicate science to young people in an accessible, creative way.

The shortlisted books were:

Curiosity: The Story of a Mars Rover by MarkusMotum

Women in Science by Rachel Ignotofsky