Year 7 Play: Our Teacher's A Troll 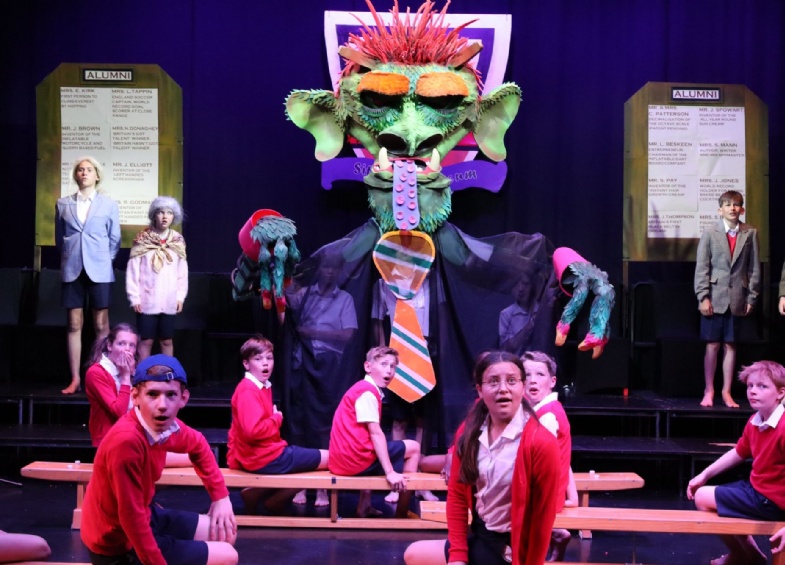 Originally written for three actors by Dennis Kelly (playwright of Matilda the Musical), ‘Our Teacher's A Troll’ tells the story of Sean and Holly ‘the terrible twins’ who have their headmistress replaced by a child eating troll. The troll proceeds to scare the teachers, put the students to work in a goldmine and eat anyone who doesn’t behave. The twins realise something is amiss and go to a ream of adults for help; including their mum, a policeman, the school inspectors and the Prime Minister, who all smile at their story and ignore them. The children are forced to take matters into their own hands and learn to speak ‘troll’ overnight.

Our fabulous cast did a great job of showing their naughty side (for artistic purposes only!) and prompted plenty of laughs from their appreciative audience.

"I was hugely impressed by Year 7's engaging performance," says Mr Gillam. "Each and every child acted their heart out while also stage-managing each scene - the end result being a slick, professional-standard production full of wit, naughtiness and a moral tale to boot."

Congratulations to Mrs Mann and Year 7 on a super production and special thanks to Mr Pay for his incredible, life-size troll!