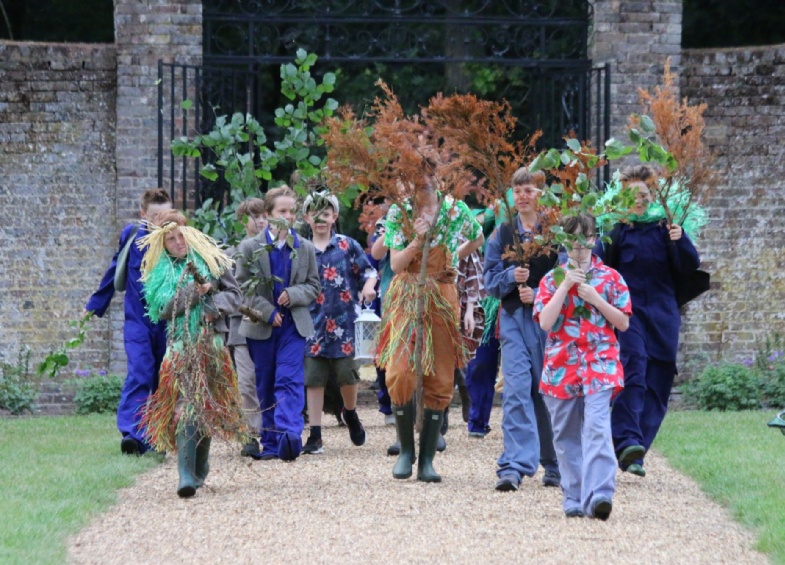 The instructions were clear: bring a blanket and head for the woods.

And the parents and grandparents, brothers and sisters, and teachers of Year 7 did exactly that; wandering deep into the wood, through the verdant trees and past the Middle School dens, following the small arrows that heralded that this was the way to the play: A Midsummer Night’s Dream.

Eventually, the arrows led us to an imposing iron gate, embedded in a high stone wall. We stepped though to find ourselves just beyond the boundaries of the school grounds and in the Walled Garden of the Woodhall Estate. There was a brilliance in setting the play in a place that has always been just beyond our experience: it is in such places that magic is bound to happen.

A Midsummer Night’s Dream is a fantastical comic tale by William Shakespeare exploring love, magic and mix-ups. When Hermia plans to elope from the city of Athens with her true love, Lysander, her best friend, Helena, vows to chase after her – bringing Hermia’s spurned lover Demetrius with her. All four find themselves lost in the forest where the King of the Fairies and his servant Puck decide to have some fun with their new visitors. At the same time, a troop of well-meaning, if poorly prepared, local Mechanicals attempt to rehearse a play to celebrate the upcoming marriage of the Duke of Athens. Cue more magic, more mix-ups and a fairy falling hopelessly in love with a donkey!

Director Miss. Ferguson’s staging of this chaotic tale was inspired, using the space to impressive effect by having the cast run up and down paths to a central performance area in the middle of the garden. Once in the central area, pupils performed in the round, showing an excellent awareness of their audience and projecting their voices to be heard by the crowd, successfully competing with the twittering of the birds and the occasional low-flying plane.

The play was a slightly shorter version of the original text, and the pupils excelled in using Shakespeare’s original language with accuracy and power, revelling in throwing linguistic barbs as each other in perfect iambic pentameter.

The costume choices suited the otherworldly nature of the play, being so studiously non-specific to any particular time or style as to give the audience the sense that we were in a space that existed out of time altogether. There were some broad costume rules that helped us to differentiate the groups of players, with muted colours reserved for the nobles and young lovers and  animal prints and styles assigned to the fairies. As the play was double cast, striking costume pieces – such as the head-dresses worn by Titania and Oberon – were a helpful signpost to the audience when the actors changed.

A Midsummer Night’s Dream really is an ensemble production. Nowhere was this more evident than in the scenes involving the Mechanicals. They were a literal troop, descending on the stage in a riot of colour and energy. Some inspired ad-libbing from various cast members elevated the tomfoolery into the truly comic.

The double casting gave the audience a unique opportunity to see alternative interpretations of some characters within the same performance. An excellent example of this was in the double-casting of Oberon and Puck.

Lara’s interpretation of Puck was gloriously casual and dismissive; she virtually stalked the characters, firing magic potion at the sleeping Athenians with a nonchalant distain. She was clearly the protégé of William’s menacing Oberon, who bristled with indignation at Titania’s refusal to share her changeling boy. In the second half of the play, Flora’s playful and delicate interpretation of the character seemed more in league with Barney’s Oberon, as the pair conspired to bring harmony and reconciliation to the forest.

In one of the best ‘Who’s-Playing-Who?’ moments of the evening we saw fearless acting from Ashley who had taken over the role of Bottom, who in turn had taken on the role of Pyramus for the play-within-a-play in A Midsummer Night’s Dream’s final act. Ashley’s dramatic death scene, where he dies not once but seven times within the same speech had the audience in fits of laughter, supported ably by Charlie (playing Flute, playing Thisbe!) who gave a wonderfully dramatic death scene of his own to bring the play-within-a-play to a suitably chaotic end!

So, with a final word from Puck, assuring us that all of the magical happenings had been ‘but a dream’ the play concluded.  We roused ourselves from our picnic blankets, still feeling the enchantment of this wonderful production and began to make our way back to reality; down the path towards the school, leaving the woods and the garden to the fairies.